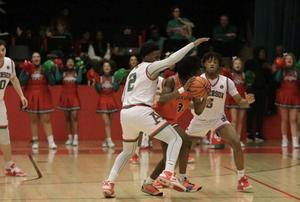 Ahmere Carson buried the Tribe’s first of five first-quarter 3-pointers in the initial 15 seconds, Anderson posted back-to-back 20-plus point frames in the first half, three of the Indians’ five starters reached double figures by the end and the defending North Central Conference champions rolled against visiting West Lafayette Harrison, 77-53.

The loss was only Harrison’s second on the season and secured Anderson head coach Donnie Bowling’s 150th win in his 11-year career.

“It’s a blessing. We got coach his 150, a good accomplishment and they’re 12-2 now, so that’s a big win,” Anderson sophomore Damien King said. “Big statement. Big school. We’re looking to go back-to-back in the NCC.”

The Raiders (12-2, 2-2 NCC) were looking to snap the Tribe’s conference winning streak, but despite two first-quarter ties, they couldn’t keep pace, falling behind by double digits before the second quarter.

Carson had a team-high 22 points on 8-of-13 shooting to go with nine assists, seven steals, three rebounds and a blocked shot.

His game-opening 3-pointer set the tone, as he converted 3-of-6 overall, and the Indians went 6-of-13 from beyond the arc.

“We just wanted to come out with a lot of energy. We tried to do it for Coach Bowling. He got his 150. We’re on a seven-game win streak and 13-game win streak in conference, so we’re just trying to keep it going,” Carson said. “Big statement. We have a target on our back now. Everybody wants to take us down.”

Anderson’s last conference setback came against McCutcheon at home in 2020-21. This year, the Tribe (11-3, 4-0) stands 6-0 on Phil Buck Court, and behind a 13-1 run through the final 2:38 of the first quarter against Harrison, the Tribe made themselves right at home.

King had 21 points on 9-of-11 shooting, while Jaylen Murphy scored all 10 of his points in the second half and Ja’Quan Ingram added nine points with seven rebounds and four assists.

The Tribe shot 60% in the first half (17-of-28) and 60% for the game (31-of-51) with a steady feast on defense feeding the transition offense. Harrison logged 13 first-half turnovers and finished with 21 overall.

The Tribe built a 20-point lead, 42-22, before halftime with an 8-0 run capped by consecutive steals and layups by Carson and King.

King had a pair of highlight dunks, both off Carson assists. The first netted a technical foul in the first quarter for a questionable hanging on the rim violation, and the second pushed the Indians’ advantage to 50-33 in the third quarter.

“It’s a lot of fun (with Carson). Even when he doesn’t make his shot, we have his back with the rebounds,” King said.

The margin hovered at 20 points throughout the second half until the Indians went on a 9-3 run in the last 3:18.

Harrison opened the season 11-0 before losing to Class 4A No. 8 Kokomo on Jan. 13 during their NCC meeting, 74-53. Anderson won the NCC in 2021-22 outright at 9-0 and still has matchups with McCutcheon at home, Richmond on the road and at Logansport ahead of them.

The Indians' regular-season finale Feb. 17 at home will pit them against Kokomo, which remains unbeaten in the NCC at 4-0. The winner could determine the conference championship.

“The thing about Kokomo -- I know the rankings and all that -- but we beat them in the summer. We beat ’em last year, and that’s my hometown. But like I told our guys, we have to take care of business before we get there,” Bowling said.

Harrison’s Ben Henderson posted a game-high 26 points and shot 12-of-13 from the foul line. The Raiders were held to 34% shooting (16-of-47) against Anderson’s defense, but they found production from 15 feet, going 18-of-21 from the foul line.

Alex Mithoefer had 12 points for the Raiders, but Harrison couldn’t post anymore than 17 points in any quarter.

“After the Pike game (on Dec. 17), we lost again at Carmel, but then after that we went into county with a different mind state,” Carson said. “We have to keep pushing. Keep it going.”

After winning their first four games, the Indians lost three straight at Noblesville, at Pike and at Carmel. Since the losing streak, the Indians surged with seven in a row to lock down Bowling’s career milestone.

“It’s special because it means I haven’t been fired too much,” Bowling joked. “But, no, you just coach. I don’t really look at the records. It’s just another victory for me. Just keep on going.”