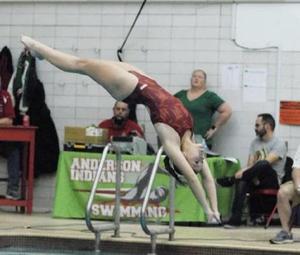 In an entirely predictable outcome, the established swimming programs at Anderson High School completed a dominant sweep of the newborn Lapel swim teams Thursday evening, 133-23 for the boys and 128-31 for the girls.

But there was much to work for where the Indians were concerned and plenty to smile about for the first-year Bulldogs program.

“Bekah had a fantastic senior evening at our last meet and was very emotional after her swims tonight,” Anderson coach Jeff Eddy said. “I couldn’t be happier for her.”

The goal for the Indians was the same as it has been all season, which is to improve with each competition leading up to sectional in two weeks. Eddy said his teams are peaking at the right time.

“We wanted to see good times tonight, and we knew (Lapel) has some good individuals and it’s a growing program,” he said. “I wanted our guys to stay focused. ... This is the first year that I can remember that we are improving time-wise after conference. Usually, conference is our plateau until sectional, but they’re still improving.”

Jena King, Allie Goar and Lily Coon completed the 200-yard medley relay team for Anderson while Maddy Tyler was uncontested in the diving competition and scored 144.90 for the win.

Lapel’s girls did not go home empty handed, picking up a pair of victories. Peyton May won the 100-yard butterfly while Katie Stephenson took the 100-yard backstroke with a winning margin of just under 11 seconds.

Like the bulk of the Bulldogs team, May and Stephenson are freshmen and products of the three-year-old middle school program. With just 10 swimmers total this year, wins are tough to come by, but with better than 20 in the middle school program now, the future is bright for the program.

“We’re a young team with freshmen and one sophomore, so we’re learning a lot,” Lapel coach Mollie Stephenson said. “Even competing against bigger teams where it isn’t competitive on the score, we’re learning. We’re growing. We’re gaining strength. We’re cutting times. They’re doing everything I ask of them.”

Katie Stephenson nearly had another victory early in the meet when Kinnaman out-touched her at the wall in the 200-yard individual medley to win by 0.37 of a second.

The Anderson boys won every competition but one — there were no divers for either team — and are looking to get their top swimmers rounding into form ahead of sectional.

Seniors Michael Strait and Bowen Libler figure to challenge for spots in the sectional finals next month and are building momentum toward that end.

The two found themselves swimming anchor legs for competing 400-yard freestyle relay teams in the meet’s final event with Strait’s team — that included Chris Greer, Cameron Dawson and Clayton Lindzy — holding a sizable advantage when he hit the water.

Rather than swim freestyle, Strait swam the breaststroke, challenging Libler to put up a fast 100-yard split. While Libler did not catch Strait, the motivation worked.

“That was to give Bowen a chance to catch him,” Eddy said. “It was a personal best for (Libler) in the 100 freestyle.”

The meet finale was one of four wins for Lindzy and three for Dawson — he swam the opening legs on both the 200-yard medley relay and 200-yard freestyle relay. Lindzy added wins in the 200-yard individual medley, 100-yard breaststroke and joined Dawson, Strait and Conner Stump in the medley relay.

While this meet was the regular season finale for the Anderson girls before sectional, the boys team will host Hamilton Heights on Tuesday. Lapel will have a busy final week of the regular season as it visits Liberty Christian on Monday, travels to the campus of IUPUI on Tuesday for the Schools with No Pools Invitational and visits Elwood on Wednesday before wrapping up in Hagerstown on Thursday.