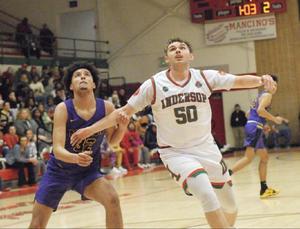 The defending NCC champion Indians made their statement behind a 19-0 run in the second quarter and cruised to a 76-44 win over rival Marion.

Up 9-0 to start before falling behind 12-11, the defending NCC champion Indians made their statement behind a 19-0 run in the second quarter and cruised to a 76-44 win over rival Marion.

Senior Ahmere Carson poured in a game-high 25 points with six rebounds, while the Indians (10-3, 3-0 NCC) had four players reach double figures to drop the visiting Marion Giants to 8-5 on the season and 2-2 in the conference.

“We tried to get back to our game. We can’t let nobody speed us up,” Carson commented on Anderson’s first-half rally. “We just had to turn the momentum around. It’s a game of runs. Everyone gets on their runs, but you have to turn it back around.”

The Indians used a trio of Marion turnovers and an 0-for-5 shooting start to jump ahead 9-0 through the game’s first four minutes, but the Giants charged back with a 12-2 run to take their only lead of the night in the opening frame.

Anderson’s grip slipped with five turnovers, but an Alex Troutman layup with 52 seconds left in the first quarter, followed by a Damien King 3-pointer put the Indians in front 16-12 – and for good the rest of the way.

Anderson was 4-0 to start the season and ranked in the state’s top-10 in Class 4A, but a 4-3 record after three straight losses pushed them out of the latest The Associated Press polls.

That hasn’t phased the Indians’ focus on collecting more titles this season.

“It’s hard losing and it’s hard coming back from losing, but we turned it on after county,” Carson said.

The defense turned up the heat against Marion and generated countless transition buckets for the Indians during their tide-turning first-half run and 25-point third quarter.

Marion amassed 12 turnovers in the first half and seven in the second. Anderson shot 52 percent in the first half (18 of 34) and were 10 of 16 in the third quarter to lead by 30 points before the final eight minutes.

However, with 1:21 on the clock in the third quarter, the atmosphere grew tense on the court, as a Marion and an Anderson player faced off and jawed at one another. Several players ran over to separate the players, and emotions spilled over leading to both teams being sent to their respective benches.

Two Marion players were whistled for two technical fouls during the altercation, and no players or coaches were ejected. Anderson was issued a technical foul for taunting, as several players pointed to the scoreboard and induced the student section to chant in response.

“It was the rivalry, the emotions, but at the end of the day, we can’t do that,” Anderson head coach Donnie Bowling said. “If it was a one-point game, you end up losing the game much like at Pike when we lost a game with 59.5 seconds because we got a technical. Just something stupid. You have to be better than that. At the end of the day, you have to be on the higher ground. You can’t stoop to that level.”

Anderson soared after the incident, turning a 59-30 advantage into a 72-37 margin nearly four minutes later.

“I think the guys are getting a little bit more focused. Honestly, the first half, I think that was our best first half we’ve played all year,” Bowling said. “The third quarter kind of started and we did better, too, so I’m excited because Marion has been playing everyone pretty tough. I didn’t think it was going to look like this.”

“The guys that’s really come up, I think, is Troutman. Before tonight, he was scoring no points or two or four, but now he’s becoming a threat,” Bowling said.

Rogers had 11 points for the Giants, followed by 10 from Jaymen Townsend and nine from Lautusi Jackson. Both Jamerion Fouce and Jadion Smith each had six points. The Giants were held to 24 second-half points, as the Indians rolled for 35 points.

“We want to win (the NCC), and there’s a lot of emotion. You have your Muncies, Andersons and Marion that are kind of close, so there’s a lot of social media and people talking. People are coming after us. All that type of stuff, but at the end of the day, we’ve won 12 straight in the NCC,” Bowling said.