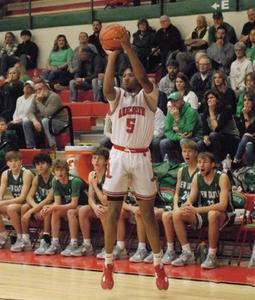 King’s growth as a player is vital to the continued success of the team. He adds an extra dimension to go with star seniors Ahmere Carson, Ja’Quan Ingram and Jaylen Murphy.

Although playing time was limited a year ago as a 6-foot-4, skinny freshman, Damien King showed flashes of the talent that would soon be more visible at the varsity level for Anderson.

Now a sophomore, King has bulked up 20 pounds after an offseason of tireless work in the weight room and the gymnasium, and it is easy to see why his coaches have been excited about his first year as a varsity starter for the Indians.

King scored 14 of his 18 points in the first half and played a big role in a 24-point Anderson first quarter as the Class 4A ninth-ranked Indians rolled past 3A New Castle 76-56 on Phil Buck Court on Saturday night.

Anderson improved to 3-0 on the young season while the Trojans fell to 2-2.

King’s growth as a player is vital to the continued success of the team. He adds an extra dimension to go with star seniors Ahmere Carson, Ja’Quan Ingram and Jaylen Murphy.

“He’s worked hard, and he’s one of the guys who shoots after practice every day,” Anderson coach Donnie Bowling said. “That’s big because before the season everybody said we’re just Ahmere. Now they’re starting to notice Ja’Quan. And now you’ve got to guard King, too.”

And nights like Saturday do nothing for King except grow his confidence.

He scored seven of Anderson’s first nine points on three field goals made in different ways. He put back a missed Carson shot on the game’s opening possession, drove to the rim moments later for a 6-2 lead and canned a 3-point basket two possessions later to extend the lead to 9-4. He added two more baskets later in the quarter on another offensive rebound and a post move on the block that gave the Indians their first double-digit lead at 24-14.

“The first game, I was pretty nervous,” King said. “But since making that first bucket, the confidence just keeps going up.”

He finished with seven rebounds, including five on the offensive glass.

“They don’t really know, but we see him in practice,” Bowling said. “He rebounds everything in practice, and he shoots the ball a little better than people think.”

King and Carson opened the second quarter with consecutive 3-point baskets before Ingram hit a pair of free throws, pushing the Indians' lead to 32-16, and the Trojans could get no closer than 10 the rest of the game.

The one time New Castle did close to 10 points — at 34-24 — Carson and Ingram connected on back-to-back treys to push the lead back to 16 points.

Ingram led Anderson with 19 points while Carson had 18 points, 10 rebounds, six assists and seven steals, and Murphy scored all eight of his points in the second half.

An Indiana All-Star candidate, the talented Carson still draws the ire of Bowling at times. Much of the coach’s time during two of his timeouts was devoted to correcting his senior guard’s play. He knows just how good Carson can be.

“It’s hard to coach a guy like that because he makes most of his threes,” Bowling said. “We’re trying to work it a little bit. I know I’m real hard on him, but I know how good he can be, and I’m trying to push him to be even better. You can’t push people if you don’t love them and they don’t love you.”

The thorn in Anderson’s side Saturday evening was New Castle senior Ethan Hinton. The 6-2 guard got to the rim, seemingly at will, and finished with a game-high 28 points. Gavin Welch added 12 for the Trojans.

“We’ve got to get better at playing man-to-man defense and containment,” Bowling said. “I give him credit. I didn’t expect that. I expected it from Welch.”

Anderson will be on the road for its next two outings, Friday at Arsenal Tech in its first North Central Conference game and Saturday at Noblesville.