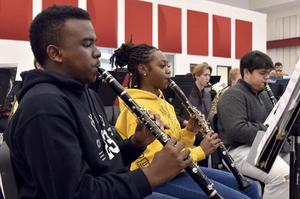 “In a sense, we’re restoring that tradition while still maintaining the cheer that we have done at football games and basketball games.”

The scene at Anderson High School on Saturday before the boys basketball team takes the court against New Castle will include the customary pregame elements of pageantry and hype.

Most of them, that is — but not all of them.

While the school’s pep band will be on hand for the first time this year to energize the crowd before tipoff, one notable part of the pregame festivities will be missing.

The traditional Indian mascot and maiden dance — a staple at Anderson home games for decades — has been abandoned after a decision by the Anderson Community Schools board in June.

The board’s unanimous vote came in response to backlash from some who, after seeing a video of the routine that went viral on TikTok, said the costumed figures represented a misappropriation of tribal culture.

“As we were made aware last fall that having students dress up in Native American regalia and perform as our mascot and maiden was nearly universally viewed by Native Americans as offensive, we had to listen,” ACS Superintendent Dr. Joe Cronk said.

The board’s action meant that members of the high school’s arts and music programs needed to tweak the normal lineup of music that had become ingrained in their routines.

“I think it’s been time for a while to consider doing something new, for the sake of the kids,” said AHS Band Director Richard Geisler.

“Kids will spend four years in the program, if they decide to do all four years, and four years of playing the exact same routine at every basketball game gets a little bit old for the kids.”

Geisler said the only change in the pep band’s repertoire is the removal of a tune that led directly into the mascot and maiden’s appearance. Instead, after the playing of the national anthem, once the lights come up in the gymnasium, the cheerleaders and drummers will take the floor for a short performance.

That element, Geisler noted, is a nod to a pregame tradition formerly practiced at Madison Heights High School.

“In a sense, we’re restoring that tradition while still maintaining the cheer that we have done at football games and basketball games.”

While the change has drawn mixed reaction from Anderson alumni and others in the community, some current students — including band members — said they were able to accept the decision without much reluctance.

“It was a shock at first, but then afterwards, we kind of got used to it,” said Shamiya McCloud, a senior trumpet player.

Geisler expects a period of adjustment among Anderson fans who are used to the routine and who may still see the mascot and maiden as enduring symbols of the school’s history. He said all students — however they’re involved with representing the school — deserve the community’s support.

“These sporting events, I see them as community events,” Geisler said. “The No. 1 thing I want fans to take when they leave a basketball game is that feeling of a sense of community and pride.

“My hope is through what we do with our color guard, our drums, our pep band, that we are something that our community can be proud of, and that everyone can speak positively about around the community.”