Raising the walls on a new Habitat home 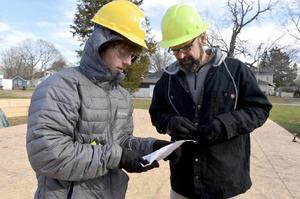 By the end of the week, the exterior framework on a Habitat for Humanity home being constructed by D26 program students should be completed.

The house in the 2100 block of Fletcher Street will be constructed by students in the Anderson High School Career Center program and is being funded with $75,000 from the Anderson Community Development Department.

Mark Seleyman, one of the construction teachers with D26, said Tuesday the students were preparing to erect all of the outside walls.

Fredericks Contracting will place the roof trusses in place, and students will complete the roof on the home.

All the students working on the project are seniors.

“They’re learning a trade. Some have already transitioned over to working for local companies,” he said. “This is an awesome opportunity with a lot of hands-on experience.”

Dominic Crawford said the project is fun and educational.

“We get to learn the infrastructure of houses and how it works and how they are built,” he said. “Even if you don’t want to go into the business, you learn about financial things of owning a home.”

Crawford wants to make physical therapy a career, but he said this is a good (backup) plan.

Timothy Shane said he has been involved in construction for several years.

“This is what I want as a career,” he said. “I would like to do concrete work. The best part is being out here with the guys.”

Aaron Garcia said he loves being in the D26 program.

“Maybe I want to do this as a living,” he said. “I like doing all the work.

“Putting up the walls is easy,” Garcia said. “I’ve done this before.”

Jan Miller, director of the Habitat for Humanity program, said the organization would like to have the students build one home each year.

“It’s been a great partnership,” she said. “We’re hoping to have the house completed by the end of the school year.”

When completed, Kyle Morgan and his four children will live in the house. He is employed at the Geater Center.

“Right now, I’m renting from my dad,” Morgan said during the groundbreaking ceremony. “I’m ready to take the next step in my life, which is ownership.

“It’s phenomenal to know the community is giving back to me,” he added. “I always try to give back to the community.”

Morgan said he knows many of the students who will build the house, and that means a lot to him.

And, he said, “My children are very excited to have a family home.”