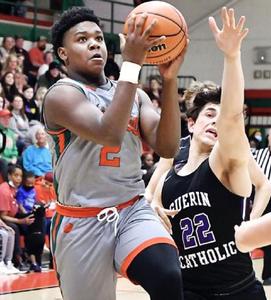 At a glance, the 2021-22 season was a profound success for the Anderson boys basketball program.

The Indians finished with a record of 20-5 — their best since former head coach Ron Hecklinski led the Tribe to the same mark in 2008-09. Anderson’s winning record finally snapped a string of eight consecutive .500 or less campaigns. It’s first since 2012-13 when former coach Joe Nadaline’s Indians went 16-6.

The Tribe cracked the state’s Class 4A rankings, won the Madison County title for the first time since 2014 and rolled to an outright North Central Conference title at 9-0.

However, the crown jewel missing from their long list of accolades is notably still the most significant — a sectional championship. Something the program hasn’t seized since the days of the Wigwam.

At 13 years now without a sectional trophy, Anderson head coach Donnie Bowling believes the drought is destined to end sooner rather than later if he has anything to say about it.

“It’s a big thing. Myself, I’ve been able to do some good things with teams and have top-five teams and all that stuff, but we’ve never been able to win that sectional championship. It’s a big deal. I try not to put any pressure on the team about it, but myself, I put pressure on myself because it’s like, ‘Man, I can win during the season, but can we translate that to the postseason?,” Bowling said.

“This year, I really think we have the most experience coming into that sectional. There are some good teams because teams always get better, but I feel like we have the experience with our top guys coming back,” Bowling said. “But you can think one thing, and you never know. Teams get better and mature.”

Mix in 6-8 senior Jaylen Murphy — who averaged nearly 20 points during the summer — 6-4 sophomore Damien King and 6-4 senior Alex Troutman, a Hamilton Southeastern transfer, and the Tribe, once again, appear to be a contender.

“We’re going to miss Paige, but I think we’re going to be pretty good. Just being able to practice against those guys all the time last year was good for these guys,” Bowling said. “I think the difference from last year to this year is our speed. We have a little bit more than we did last year.”

Junior Lewis Jackson, freshman Colin Lewis and the return of 6-5 senior Latrell White, who started for Anderson three seasons ago, will give the Indians a steady eight-man rotation.

“The main thing is they matured a lot off the court and on the court. It’s about knowing how to have success. Talent-wise we’re right there with all of those teams in our sectional. We just need to know how to handle success,” Bowling said.

This summer, the Indians took the necessary steps to prepare for the pressure-cooker spotlight, which they felt firsthand during last year’s sectional semifinal loss, 82-76, against Mount Vernon in front of a near-sellout crowd.

“This summer, we played everybody. The only team that beat us this summer was Cathedral. Everybody else we beat. We didn’t get to play Ben Davis, but against everybody else, it was pretty much 10 points or better,” Bowling said.

“I really feel that our kids think they can beat anybody right now, and that’s the thing I need to watch. We can’t get overconfident. We just have to be ready to play every game and be prepared.”

This article appeared in The Herald Bulletin on November 19, 2022.