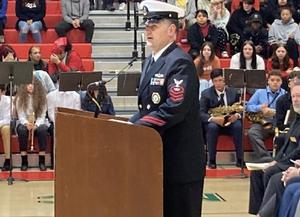 Headlining the event was Chief Bradley Dowden, recruiter for the United States Navy, who spoke briefly about the history of Veterans Day.

Celebrating veterans past, present and future, is what the annual Veterans Day celebration at Anderson High School was all about.

Headlining the event was Chief Bradley Dowden, recruiter for the United States Navy, who spoke briefly about the history of Veterans Day.

Veterans Day, Nov. 11, was established as a legal holiday in May 1938, as Armistice Day. According to Dowden, it was a time to celebrate the Armistice, which ended World War I.

In 1953, the 83rd Congress changed the holiday to Veterans Day to honor those who had served in all U.S. wars, according to Dowden and the U.S. Department of Veterans Affairs website.

Three Anderson high school students will be heading to boot camp soon, one of which is Sean Miller. Figuring college wasn't the path for him, he joined the United States Navy. Miller said his parents worked tirelessly to provide for him and his siblings, but said he wanted better for his future.

"I went into the military to support myself and my future family, so they didn't have to grow up the way that I had to grow up," he said. "I'm not saying it was bad, nor was it good."

Miller said he will join the veterans in his family when he goes to boot camp in July.

Being surrounded by those who served, Miller was taught to have great respect for veterans from an early age.

"I was raised to respect your veterans and respect your elders," he said. "I think people should highly respect veterans for all they've done to sacrifice and what they've overcome for this country."

The Anderson High School band and choir played songs from the branches of the armed forces. Veterans in the audience were asked to stand when their song was played. Almost an entire row of Navy veterans stood during "Anchors Away."

Another instrumental ensemble accompanied the band in a spectacular rendition of the main theme from the show, "The Pacific." The concert featured bagpipers and various marching drums.

The celebration ended with veterans leaving the building as the band played The Washington Post march by John Phillip Sousa.

In a separate interview, Dowden said Veterans Day helps give people a sense of pride in their country and its veterans, which he believes is greatly needed.

"I think now more than ever, we really need a little more pride in our country," he said. "I think over the last couple years, with just the way things have gone, with the pandemic, I think we've kind of dialed back on how open we are about those things."

This article appeared in The Herald Bulletin on November 12, 2022.