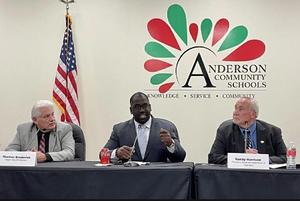 The 90-minute discussion gave Ingram a chance to listen as ACS officials, including Superintendent Dr. Joe Cronk and Board President Pat Hill, spotlighted collaborative efforts between the district and local educational, civic and business institutions they described as vital for enhancing students’ educational experiences.

ANDERSON — Public educators are facing never-before-seen headwinds when it comes to shepherding students to academic and social readiness for the world beyond high school, a national official with the American Federation of Teachers told local panelists Wednesday.

“These kids have seen more death, more hospitalization, more obstacles and challenges than we as adults have seen in a lifetime,” AFT Secretary-Treasurer Fedrick Ingram said during a roundtable discussion at the Anderson Community Schools administrative offices.

“More than ever, you have to give these students a reason to sit down before you can actually impart some knowledge to them.”

The 90-minute discussion gave Ingram a chance to listen as ACS officials, including Superintendent Dr. Joe Cronk and Board President Pat Hill, spotlighted collaborative efforts between the district and local educational, civic and business institutions they described as vital for enhancing students’ educational experiences.

The dialogue addressed teacher shortages that have affected districts across Indiana as well as nationwide.

According to the Indiana Department of Education’s job board, nearly 2,800 teaching jobs remain open across the state. The pandemic, several agreed, didn’t create the problem but rather exacerbated it. Policies enacted in various state legislatures, they said, have not helped.

“These policies have watered down the teaching profession — degraded it, demonized it, obviously it never paid enough — and that started a teacher shortage or exodus prior to the pandemic,” said Randy Harrison, president of AFT Local 519, who moderated the discussion.

“You don’t even need teaching licenses in multiple states like Indiana to teach and even to be a superintendent. Now they say you can obtain a degree in something else, and then you can transition to teaching and be a great teacher. That’s a problem to me in my profession, and to me that started to lead to the teaching shortage.”

Another topic of discussion was the challenge many teachers face in securing needed resources for their classrooms — a task panelists said is becoming increasingly political in nature — while making sure their students remain focused on the material being presented.

“We have to talk about policy. We have to confront that. But then we have to take the politics out of the classroom,” said Aimee West, executive director of the Anderson Education Foundation.

“Our kids … have been exposed to culture wars, and they’re in the middle of a tug-of-war, and it’s not fair. It is not fair to them.”

The post-pandemic return to in-person learning in many schools has not been a smooth transition, Harrison acknowledged. Student achievement, as measured by several reputable benchmarks, has dropped precipitously since the height of the pandemic.

For example, in the National Assessment of Educational Progress (NAEP) administered by the U.S. Department of Education, the percentage of students testing below the “basic” level — considered the lowest level of academic achievement — grew.

This year, in math, 25% of fourth-graders were below the basic level, as were 38% of eighth-graders.

However, Harrison said many early post-pandemic academic assessments should be taken with a grain of salt. More than ever, he noted, teachers and parents alike should recognize that there’s more going on with many students than a score on a test sheet.

“We’ve got to take that into consideration as we foster the learning in the classroom,” he said. “My belief is, when we can get that back on track, we’ll see more successes (with test scores).”

Cronk said the thoughts shared by Ingram from a national perspective were encouraging and served as a reminder that “our problems aren’t unique.”

“We tend to sometimes have a microscopic vision of what goes on in just our own little nest, our own little neck of the woods,” Cronk said. “It’s always good to get perspective and comments from somebody who visits multiple communities and is from the national level.”

This article appeared in The Herald Bulletin on Thursday, October 27, 2022.