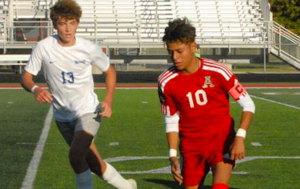 Despite losing in the opening round of the Fishers Sectional, the Tribe (6-9) won where it mattered moving forward.

FISHERS – At the conclusion of their Class 3A Sectional 8 quarterfinal loss Monday night, the Anderson Indians huddled one last time before walking off the Fishers High School football field.

Led by the boys soccer program’s 17 seniors, the Indians shed tears, consoled one another and voiced their gratitude one by one before departing just as they competed all season – together.

What wasn’t shown, however, were the strides achieved in the process and, most notably, the legacy each senior helped establish the past few months.

Despite losing in the opening round of the Fishers Sectional, the Tribe (6-9) won where it mattered moving forward.

“I’m just incredibly proud of what’s here, what’s been started. We gained a lot of respect back in the soccer community that we lost the past couple of years. Not because of foul play or anything but because we weren’t competing. It’s only going to build but had these seniors not come back together, had they not come in and set a standard, the underclassmen wouldn’t know what they’re striving for. Now, they have a standard set for them.”

As each senior player addressed the team in the final postgame huddle, the same words surfaced: pride, passion and thank you.

The Indians left nothing on the field, even as the state-ranked Royals (12-2-3) jumped out to a 3-0 lead by halftime and finished with five more goals in the second half.

“It’s tough when you’re getting bombarded with shots, especially coming inside the 6 (yard line). He came up with some huge saves. He made some great saves,” HSE head coach Chris White said of Lozano. “Take your hat off to him.”

Respect is exactly what HSE gave the Indians the entire 80 minutes, especially senior Alfredo Lopez, who entered the match with a team-best 11 goals.

Lopez was marked throughout the contest, while the Royals controlled the midfield to limit Anderson to fewer than four shots on goal.

HSE had a trio of two-goal scorers in the match, paced by junior Logan Puls, who buried the first in the 10th minute and another in the 61st minute. Junior Evan Shideler and senior Logan Wright each had two goals.

Senior Jonathan Leeper had the Royals’ final goal in the 70th minute, while junior Andrew MacDonald added another in the 47th minute. Puls had two assists, and five other Royals logged at least one.

Lopez produced the Indians’ best scoring chance, firing a direct kick from 33 yards out that just sailed over the crossbar in the 32nd minute.

Senior Jonatan Santiago-Polanco and sophomore Angel Rodriguez attacked in the final seconds, but their attempts were stymied as time expired.

“I’m very proud. Last year, we didn’t have any wins, and this year we had six. I’m really happy to be part of this team,” Lopez said. “Every game that happens to me, and it was tough because they were on me the whole time, but I’m used to it. I wish that one would have went in. It would have been nice.”

A team on a mission to contend for state, HSE made sure nothing was left to chance against Anderson, as it eyed a probable rematch with No. 3 Fishers in Wednesday’s semifinal round.

“With the year that we’ve had, it’s a game you obviously expect to get a result in, but soccer is such a funny sport, and they’ve played it long enough to know that you respect everyone when it comes tournament time,” White said.

“(Lopez) is a really nice player. You can see he belonged playing at a high level from his first touch. I was really impressed that he didn’t try to do everything himself to get out of it. He’s wanting to play in college, and he has the ability to do that.”

He isn’t the only one from the Anderson senior class, and he potentially won’t be the last with the future set in motion.

“We had a lot of underclassmen play big minutes,” Spolyar said. “If it wasn’t for the willingness of this senior class to allow what was best for the program at times, we wouldn’t be on the path we’re on. They set a standard for these guys not only in the classroom but on the field. How to act. How to treat each other. That’s huge. You need that. You need that standard barrier. And now we have it.”

Knowing they made an impact was a win for the seniors, but it didn’t make the finale any easier.

“It’s really tough since most of us grew up playing together. To accept the fact that this was literally our last game together in high school, it’s really sad because most of us are going to go on and continue playing the game, but it’s not going to be the same as this,” Lozano said.

“I hope (the underclassmen) feel inspired to work hard and to finish what we started. Anderson, last year, had no respect. We came into the season with no one respecting us, thinking we were a joke. Through the whole season we’ve earned people's respect, and we hope they keep that respect and go further than we did.”

This article appeared in The Herald Bulletin on October 3, 2022.