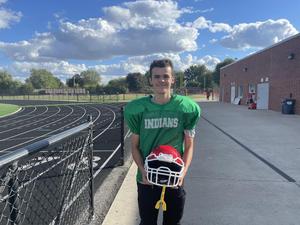 No, this was more like anticipation for Anderson’s unlikely senior kicker. The first football game of his life was coming down to his leg.

Before the snap, he took a deep breath, looked for his spotter – senior Dontrez Fuller – and focused on his fundamentals and mechanics. Even before the ball sailed through the uprights to give the Indians a 27-26 overtime victory, Arquillos turned and raised his arms in celebration.

Just like his host family taught him. Sort of.

“Our focus has been when you get out there on the field, after you line it up, that field goal – the goalposts don’t matter. That defensive line doesn’t matter. The only thing that matters is the spotter, where you plant your foot and kicking the ball,” Anderson assistant coach Brandon Schritter said. “And I told him, ‘If you do all three things right, you can turn around, throw your hands up in the air because you know it’s going where you want it to go. You don’t have to look at those goalposts.’

“I was being a wise guy. He took it serious. He kicked that ball, turned around, put his hands up in the air and I’m just like …”

Schritter trailed off, still with some level of disbelief more than 72 hours after the kick.

It’s understandable. So much of this story seems unlikely – if not impossible.

Arquillos was making his season debut in Week 6 because he arrived in Anderson from his home near Madrid, Spain, after the school year started. By IHSAA rules, he needed to participate in 10 practices before he could play.

So there was a transition period to start his high school football career, but that’s not the half of it.

Arquillos – known affectionately by teammates and coaches alike as “Nacho” – had never kicked a ball in competition before the opening kickoff Friday against the Titans.

In fact, he’d never truly played organized sports of any type – at least not in a way recognizable to Americans. Arquillos enjoyed playing basketball in Spain, but his experience was mainly limited to physical education classes, intramurals and other clubs.

His true love was football.

Despite the six-hour time difference from the East Coast, Arquillos became a fan of superstar quarterback Patrick Mahomes and the Kansas City Chiefs by watching NFL games online.

After the Schritters agreed to host him for this school year, the first goal Arquillos set when he got off the plane was to join the local football team.

That meant trying out, and Schritter’s history with special teams led to an audition as a kicker.

Arquillos showed up to Collier Field wearing jeans and a pair of Chuck Taylor All-Stars. He promptly sent five consecutive field goals through the uprights.

Not every step of the journey has been so instantly successful for Arquillos. He’s spoken English since he was 4 years old but never so extensively and never for so prolonged a period in conversational settings.

He’s learning a new country, a new culture and a new game all while facing the same challenges of any high school senior across the country.

“It’s kind of difficult because my first experience (with America) was taking the airplane through here by myself,” Arquillos said. “So I had to mature a lot and be very responsible, to be honest, because I have to meet new people. Here everything’s new for me – like the (culture) is very different, the food, how things are done.

“And with this (football) part, I don’t know. Since the first day, I wanted to be the best I can to help the team the most. And I saw the soccer (style) kick. I could do it. So here I am doing 100% each day.”

Some of Arquillos’ new discoveries include eggs for breakfast and The Old Spaghetti Factory in downtown Indianapolis. He’s also developed a taste for Ramen noodles, and Schritter has enjoyed teaching him the many different ways they can be prepared.

But his most fulfilling moments have come alongside his football teammates. He refers to the Indians, who at 3-3 overall and 3-1 in the NCC are off to their best start since 2011, as his family.

And they have helped him acclimate to his new environment in so many ways.

“They try to help me as much as they can – everyone on the team, including the coach (Jarrod Pennycuff) and the staff,” Arquillos said. “They always try to help me, to motivate me the most that they could. So I’m very proud and very comfortable with them.”

While his teammates swarmed him and the homecoming crowd roared after Friday’s win, Arquillos noted he scored just a single point in the game.

Daris Miles, filling in as the starting quarterback, threw a pair of long touchdown passes. The defense got a crucial stop on the 2-point conversion after Arsenal Tech scored on the first possession of overtime. And Teddy McGee scored a touchdown from the 1-yard line to set up Arquillos’ kick.

Without any of those plays – and dozens of others -- there’s no dream ending.

But, make no mistake, Arquillos most certainly feels as though he’s living a dream.

“Anybody who’s ever come up in America and has seen football, this was a dream come true,” Schritter said. “Everybody’s thought about it. I don’t care if it’s basketball, baseball – hey, final inning, hey, the final seconds, I’m shooting the game-winning score. I mean, it was a dream come true that he actually had the opportunity, and the fact of the matter is it was a team win.

“I mean, if the linemen didn’t block, if the spotter didn’t hold the ball and place it right – everything had to be right in line, and it just really gave him a memory. His dad got to come out here when he was in high school to Michigan. And here Nacho’s been here for three or four weeks and already has a better story than his dad. It really doesn’t get any better than that.”

Arquillos’ first two extra-point attempts against the Titans did not go as planned.

He admits nerves played a role in the first try, and he missed the kick. His second attempt looked good coming off his foot but was blocked on an outstanding play by the defense.

Arquillos would love to continue playing football when he returns to Spain after the school year but is unsure there will be opportunities.

In the more immediate future, he plans to try out for the powerhouse Anderson boys basketball team. Having already beaten the odds once, he’s ready to continue this incredible journey.

And, of course, there are three more regular-season football games remaining – beginning Friday night at home against Kokomo – and at least one sectional contest before Arquillos’ unlikely high school football career concludes.

He’s already got a moment he’ll cherish for the rest of his life, and Arquillos vows to make the most of every remaining opportunity.

“This thing has reminded me how special things can get, how good things can come true,” Arquillos said. “So I don’t know. I will say that always try different things because something that you wouldn’t expect to happen, there’s a chance that it will happen.

“So I don’t know. I will tell everyone to try new things and do the best as you can every time of the day. Because if I hadn’t practiced before, that kick wouldn’t have gone in.”