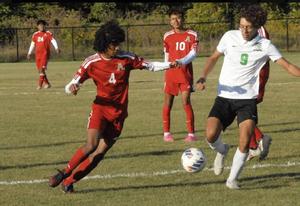 Anderson (5-9) had a point to prove to itself against New Castle (2-12), and it showed with more than a dozen attacks and nearly 20 shots recorded in the first half.

ANDERSON – Kieran Bridgeman had been close multiple times beforehand, but on Tuesday night, his wait finally came to an end.

Formerly an Anderson senior soccer player without a goal in his career, Bridgeman cleaned up a ricocheted tip save in the 17th minute to give the Indians an early 1-0 lead, while a pair of crucial second-half goals by his teammates propelled the Tribe to a 4-2 senior night victory over New Castle.

Bridgeman’s goal sparked the Tribe, which built a 2-0 lead by halftime before the visiting Trojans deadlocked the score 2-all in the 53rd minute.

The bookend senior goals for Anderson emphasized the program’s celebration theme, as they honored all 17 upperclassmen at halftime and throughout the evening.

“Kieran had been injured most of the season, so he is just now getting back into things to get that goal, and Tyler is one of those kids that just makes things happen,” Anderson coach Chris Spolyar said. “He was in the right place at the right time again. It just found them. Good for them, especially tonight because it is special, and it is their night.”

Anderson (5-9) had a point to prove to itself against New Castle (2-12), and it showed with more than a dozen attacks and nearly 20 shots recorded in the first half.

However, Christman didn’t see Bridgeman charging hard a few feet behind Rodriguez for the put-back attempt.

“That goal to me, I’ve been waiting for it. I was waiting all game, those almost 20 minutes, and I finally got it,” Bridgeman said. “It just kind of shows, if you wait long enough and you keep trying and you keep going, the goal will eventually come.”

The second goal unfolded as the Tribe clamped down on the midfield, limiting the Trojans to two shots and one shot on goal through the first 40 minutes.

An unassisted goal by freshman Michael Lozano gave the Indians a 2-0 lead with 2 minutes, 27 seconds left before the intermission.

“Tonight was really special. It just brought back the pride and the joy, and it reminded us why we love the game,” Bridgeman said. “This game, the energy was up. Everyone was excited. Everyone was happy and having fun. Honestly, this was just a reminder of why we love doing it, why we come out here and come out to practice every day.”

The Tribe’s pride was tested by the Trojans in the second half, as New Castle captain Ashton Rainer, a senior, converted a long-range shot to make it 2-1 in the 45th minute.

New Castle tallied seven shot attempts in the second half and was a perfect 2-for-2 to start the final 40 minutes in shots on goal. Christman logged 16 saves in the contest overall.

Anderson senior goalkeeper Carlos Lozano had two saves, but it was the Indians’ rotating lineup that controlled the tempo.

“We tried to make sure we got all 17 seniors into the varsity match, so some guys were playing different positions. Some guys were playing that typically don’t play at this level, but you know what, it’s what we do,” Spolyar said. “These seniors have put either one year or four years in, and they work hard, so we wanted to reward them. Everybody dressed tonight, all 38 guys.”

Rodriguez backed his elder teammates, taking an assist by senior Jonatan Rivera-Polanco and turning it into the eventual game-winning goal with a floater over the top of Christman with 19:31 remaining.

“It’s quite nice seeing the younger generation isn’t quite giving up yet. They keep pushing it. It shows once the senior class leaves, the younger classes will be able to carry on and hopefully continue to improve on the program that we have at Anderson,” Bridgeman said.

Rodriguez finished the night with a goal and an assist.

Terrell’s goal was assisted by junior Cristian Hernandez on a breakaway attack with 2:01 left on the clock.

Anderson recorded 15 shots on goal in the second half with most of them coming after the game was deadlocked. The win was something the program was searching for after losing five of its last six games.

Up next, the Indians travel to Wapahani on Thursday to conclude the regular season before heading to Class 3A Sectional 8 in Hamilton County on Monday to face 3A No. 5 Hamilton Southeastern in the first round.

“We respect (coach) Chris (White), and we respect HSE. We’ve seen them multiple times, but we’ve got guys who want to play. We’ve got guys here to compete. When we play simple, when we play smart and we play well, who knows what can happen?,” Spolyar said. “That’s why they play the games.”