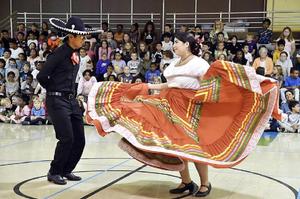 About 180 students attended Thursday’s program, which was in the gymnasium and coincided with the start of Hispanic Heritage Month. School administrators said a variety of cultural observances are planned throughout the school year, and each carries significance for the students’ overall educational experience.

As Tanya Gonzalez recited the name of each country, most of the students echoed them back.

Then, the students paired off to learn some basic steps to a Hispanic folk dance, guided by Gonzalez and members of the Anderson Ballet Folklorico dance troupe.

“It’s always a pleasure to perform for school children because they are so interested in learning about other cultures,” said Gonzalez, the dance troupe’s coordinator.

“Our message is to share the beauty of folklorico dance from Mexico, and we really just try to engage them in activities like we did with the flag presentation, the dancing.”

About 180 students attended Thursday’s program, which was in the gymnasium and coincided with the start of Hispanic Heritage Month. School administrators said a variety of cultural observances are planned throughout the school year, and each carries significance for the students’ overall educational experience.

“It’s important for all students to acknowledge Hispanic Heritage Month, in particular when we have a population of students that are Hispanic that are here,” said Treva Bostic, director of diversity, equity and inclusion for Anderson Community Schools.

“To be able to acknowledge that your culture is important and that we’re celebrating it — that matters.”

The program was personal for Maryann Chavez, a paraeducator at Edgewood Elementary. A native of Los Angeles, Chavez said her family is from the central Mexican city of Zacatecas and, throughout her childhood, her relatives observed Dia de los Muertos, or Day of the Dead.

The traditional multiday holiday involves family and friends gathering to pay respect and to remember friends and family members who have died.

“For me it’s special and it has a lot of meaning because of my Hispanic background,” Chavez said. “It’s important that they know every heritage. They did not know anything about the culture, the celebrations, what we celebrate, the fact that we celebrate the passings of our ancestors on Dia de los Muertos for five days.”

Bostic said another goal of the program was to promote acceptance of other cultures. The young audience, she said, is in a unique position to acknowledge the value of different viewpoints and traditions.

“Respect for others should be cross-generational, regardless of what culture that you come from,” Bostic said. “It’s important for kids to acknowledge their heritage, their past, their family (members) that have gone on and things that are significant to them in their lives.”