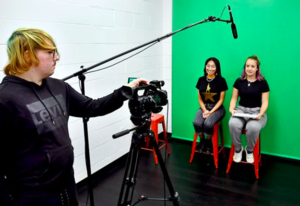 ANDERSON — A unique partnership between the Minority Health Coalition of Madison County and a group of Anderson High School students is helping raise awareness among senior citizens about the dangers of improperly storing and disposing of prescription medications.

Members of the high school’s TribeCast News team worked with MHCMC last year to produce a 3½-minute public service announcement on the topic. The project received enough positive feedback that a decision between the two groups to work together again was an easy one.

“We recognized the many talents of the student broadcast team and wanted to provide them with an opportunity to make a public service announcement that would be used throughout the community,” said Laketta Mason, the 50+ program director for the Minority Health Coalition. “We believe in our local students and recognize the importance of supporting their efforts.”

The approach being taken with this year’s project is markedly different. Instead of one longer video being uploaded to YouTube, the students are producing a series of shorter videos more suitable for platforms like TikTok and Instagram.

Although the majority of Instagram’s audience are Millenial or Gen Z users, the app boasts a global audience of more than 1 billion. And TikTok, despite skewing toward younger user demographics, has remained the most downloaded app on the planet over the last three years, with more than 2.1 billion downloads during that span.

“These videos are aimed more towards just getting (information) out into the public audience, to educate everyone,” said Ryan Mason, a senior who has worked with the TribeCast team for the past two years. “If you’re on your Instagram discovery page and it pops up, you can learn a quick little bit about safe drug usage (and) drug disposal.”

“It doesn’t matter what age group, because drugs are in our world right now,” Dillard said. “I mean, they’re all over the place. Having them get the message out by doing the TikToks and by doing the Instagrams and things like that, I think that it’s going be a great opportunity for them to help connect with some of our senior members of our community.”

Topics for the videos, program coordinators said, are chosen in alignment with the Minority Health Coalition’s 50+ program. The subject matter is similar to that shared in educational sessions that are funded through a grant that the coalition received from the Indiana Family Social Services Administration.

Mason provided the students with information on safe prescription drug disposal practices and precautions to be taken with non-expired prescriptions. The students then did further research to augment the material before fine-tuning it into final scripts for the videos.

The opportunity to craft public service announcements and provide useful information to the community is in some cases helping TribeCast team members rethink their future plans.

This article first appeared int The Herald Bulletin on August 27, 2022.