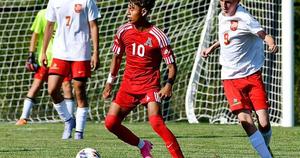 In front of a standing-room only home crowd, Anderson’s attack struck quick with a pair of goals in the match’s first eight minutes en route to a 9-0 mercy-rule

ANDERSON – There was a time last year when Anderson senior Alfredo Lopez wasn’t sure what the future would bring.

Ineligible to play the game he loved due to off-field obstacles, both Lopez and the Anderson boys soccer program faced a notable crossroad by season’s end and even later through the offseason.

One path led to a potential repeat of last season’s trying 0-12 finish, while the other presented an opportunity for Lopez and the Indians to course correct the program back into relevance.

The Indians discovered on opening night Tuesday against defending Class A sectional champion Liberty Christian, they made the right turn.

In front of a standing-room only home crowd, Anderson’s attack struck quick with a pair of goals in the match’s first eight minutes en route to a 9-0 mercy-rule, shutout victory to christen its brand new soccer complex.

In his first game back since his sophomore campaign, Lopez posted a hat trick, scoring the first official goal on the Indians’ new pitch during the regular season, and added two assists.

“I feel like we’re back,” Lopez said. “Last year, we lost a lot, and this year, I feel like we’re finally back. Our team is formed better, and everything is connected now, which is really good.”

Lopez’s first goal unfolded in the match’s third minute with the assist coming from junior Cristyan Santiago, who finished with a goal of his own before the game was eventually called in the 70th minute.

“That goal felt really good because I wasn’t able to play last year, so when I scored the first goal, I felt so relieved and happy,” Lopez said.

“It hurt a lot not playing last year. I was going through a lot, and I really wanted to play. I felt like a failure, but then during the summer I woke up. I told myself, ‘I’m not going to do this anymore. I want to make it far this year.’ I started training every day and learned so much from my club.”

This past offseason, Lopez trained with the Delaware County Futbol Club and was part of the team’s Indiana Cup championship run and a trip to St. Louis where the group competes in the Midwest Presidents Cup tournament.

Against Liberty Christian, Lopez showcased what he had learned through the experience with two slick assists and by pushing the tempo on Anderson’s final eight goals.

“He had a tremendous offseason. He was another one of many that didn’t get on the field last year,” Anderson head coach Chris Spolyar said. “He and I sat down at the end of last season, and we talked about it. I told him he needed to get into the club, and he played with DCFC and had a tremendous winter and spring with them.

“He was the catalyst at the end of the school year, getting in guys’ ears saying we all need to be there. The mantra this year is ‘Better Together’ because we are better with everybody here.”

With 15 seniors on the roster, the Indians are a multi-layered threat, and it resulted in a 4-0 lead by halftime and five more goals through the first 24 minutes in the second half.

“Last year had issues. Last year had challenges. A lot of the guys you see here on this pitch did not get the opportunity to play last year either due to COVID or due to other situations off the field,” Spolyar said. “Where this year, we’re pretty full as far as one program again.”

The Indians limited rebuilding Liberty Christian to single-digit shots and less than a handful of shots on goal, while the offense fired more than 30 shots overall.

Senior Tyler Terrell scored two goals for the Tribe. Senior Mario Padilla had a goal and an assist. Javon Warfield buried the final goal with the assist credited to Lopez, while freshman Michael Lozano converted a penalty-kick goal in the 46th minute for a 5-0 lead, which he celebrated with his teammates.

“It’s a good start. It’s one game, and it’s an opening to a gorgeous facility now. Thank you to the community of Anderson for investing in our schools because three or four years ago when that referendum went through, we didn’t know if it would pass,” Spolyar remarked on the program’s gratitude for the new complex. “Because of the investment, the guys are proud of what they got, and you can see the result with 40 guys out here trying out for soccer and now working hard.”

At times, the Indians made it look easy, scoring two goals within 35 seconds of each other in the second half as Lopez and Terrell increased the advantage to 7-0 in the 50th minute.

Liberty Christian allowed an own-goal as it rotated goalkeepers in an attempt to slow down the Tribe.

“The athleticism with some of these guys is remarkable. We’re still teaching them the game, but they’re having fun and enjoying each other,” Spolyar said. “Results are going to follow, but yeah, it’s a good group.”

For the visiting Lions, who finished 8-7-1 last season and collected their third straight and fourth sectional title overall, they are focused on turning the page rapidly after the season-opening defeat.

“The goal for these seniors is to get another sectional championship, and that’s what I want to do. They kept saying they’ve never lost to Anderson, but this is a different game. We’ll figure it out, and we’ll see how they respond to this loss.”