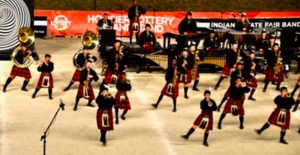 Anderson has won more state fair Band Day crowns than any other school, including the title in 2019.

Kokomo won the championship, followed by Winchester and Muncie Central in second and third, respectively.

“We had a lot to teach this year, and to get the kids from where they were at the start to where we finished was a gratifying experience,” Anderson Band Director Richard Geisler said.

“I’m very proud of where we wound up at the end of the season and grateful to the parents and the staff who had a hand in getting the kids to where they were.”

Three other marching bands from high schools in Madison County — Elwood, Alexandria and Frankton/Lapel — competed in Band Day but did not finish in the top 10.

In all, 39 high school marching bands participated in Friday’s competition.

Anderson has won more state fair Band Day crowns than any other school, including the title in 2019. The competition was canceled in 2020 because of the pandemic, and COVID concerns kept the Marching Highlanders from competing last year.

Geisler said because of the unwanted two-year hiatus, about 70% of this year’s 69 band members were experiencing competition at the state fair for the first time.

“Going into this season, all of our students had less experience than any other time we had gone to the state fair, obviously because of the pandemic,” Geisler said. “The kids in our program had an entire year of school where they were virtual.”

Those factors made this season one of Geisler’s most challenging, but he was quick to note that it ended up being one of his most satisfying, as well.

He recalled a meeting he had with his student leadership team before the season began.

At that meeting, he said, “One of the questions I asked was, when you get to the end of the season, what defines success? They said, ‘We want to restore the pride and what it means to be a Marching Highlander.’

“We talked about that before the kids came onto the track at the state fair. We feel they did that this season, and we feel like we’re in a good position to build off what we have moving forward.”

Among the band’s highlights this season: AHS placed third in Drums at Winchester on July 30; third at the Anderson Tartan Tournament of Bands, which it hosted at Highland Middle School on July 29; and third at the Jay County Lion’s Club Band Contest on July 22.

The Marching Highlanders placed first at the Centerville Archway Classic on July 16.

This article appeared in The Herald Bulletin on August 5, 2022.