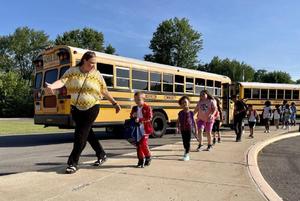 ANDERSON — As she watched her daughter Aris Lucky disappear into the east wing of Anderson Elementary School to begin her first day of kindergarten, Marisa Hughes struggled a bit to conceal the catch in her voice.

“I’m excited, but I’m nervous and sad and everything just because she’s growing up,” Hughes said. “But she’s excited and she’s happy to go. It’s just bittersweet for me.”

Those mixed emotions were on display among parents dropping their children off as Anderson Community Schools welcomed students back on Wednesday. The prevailing emotion among teachers and staff at Anderson Elementary was one of excitement as they greeted youngsters stepping off buses and slipped colored bands with their bus numbers onto their wrists.

Angel Hunt, entering her first full year as Anderson Elementary School’s principal, said the first few days will be about acclimating an estimated 350 students in kindergarten through fourth grade to procedures throughout the building – from how to stand in straight lines to finding the correct classroom and even where to set their backpacks down.

“It’s always a pleasure when you get to meet them, especially our new kids coming for the first time and trying to help them through those jitters,” Hunt said. “We want to make sure that we’re providing a supporting and caring environment from the very first day.”

Anderson Elementary staff members hosted a “Meet the Teacher” night on Tuesday, giving students and their families an opportunity to tour classrooms and familiarize themselves with the layout of the building. Diane Vargo, a second-grade teacher who is beginning her 34th year with ACS, said even after more than three decades as an educator, the anticipation of beginning a new year brings a special sense of excitement.

“You don’t sleep the night before,” she said. “You’re anxious just like some of the kids. A new year brings just new possibilities. It’s exciting.”

As buses pulled up to drop-off points along the semicircular driveway in front of the building, Hunt and her assistant principal, Kelsey Alfrey, wheeled a small cart with colored tags, class rosters and other check-in materials along the sidewalk, greeting students and checking off their names.

Getting familiar with the basics was a task that many staff members — at Anderson Elementary and elsewhere — talked about at length in the days leading up to the opening of classes.

“The first few days, particularly at the elementary levels, will be focused on building classroom communities and setting expectations and routines,” ACS Superintendent Dr. Joe Cronk said. “I appreciate everyone’s patience and understanding as we work together to make this a great start to the school year.”

For those entering kindergarten, the day represented an especially significant milestone, one that Jill Nalywaiko said she doesn’t take lightly.

“It’s just an honor to get to be the first person in a child’s school career,” said Nalywaiko, who’s entering her 21st year as a kindergarten teacher and her 33rd overall as an educator. “They come in with such varied experiences. You can’t take for granted what they know or don’t know. Some of them may have never been in a line before. It is something I think about a lot.”

With ACS and other districts returning to full in-person instruction following two years of COVID-related disruptions that prompted extended remote and hybrid learning, Hunt and her staff acknowledged that some students may have more academic catching up to do than others.

“We anticipate a possible learning curve for some students,” Hunt said. “We’ll take into consideration the various factors that may contribute to learning progression, learning loss or learning gains.”

This article appeared in The Herald Bulletin on August 1, 2022.