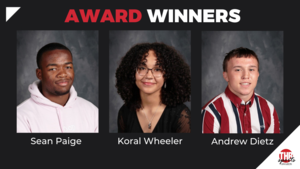 Anderson High School Seniors Sean Paige, Koral Wheeler, and Andrew Dietz receive Sports Awards from The Herald Bulletin
The Madison County area's top high school athletes were on hand Tuesday night at the Paramount Theatre in downtown Anderson for the fifth annual The Herald Bulletin (THB) Sports Awards. It was the first time in three years that the program was held in person.
Among the award recipients were three Anderson High School Seniors: Boys Breakout Award: Sean Paige
Paige had to sit out a year after moving from Chicago, and the 6-foot-8 post player made the most of his one season at Anderson. Paige averaged 9 points and 6.3 rebounds per game and helped lift Anderson's basketball team to 20 wins as well as Madison County and North Central Conference championships. He will play collegiately at Central State University. Boys Mental Attitude Award: Andrew Dietz
A Madison County champion wrestler, Dietz is highly respected by his teammates on the football team as well. He earns that respect by leading by example, something noticed by other competitors and coaches. He has also run cross country and gave golf a try this spring and kept a positive attitude at all times and has joined the Navy after graduation.
Print