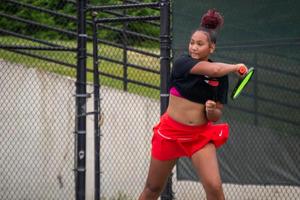 In 2022, Geoffreys won 20 matches for the second time — including another sectional singles title — and added a regional championship and a trip to the state finals

The area tennis scene has been loaded with talent over the last two years, but Anderson senior Jamison Geoffreys has stood out above the rest since she exploded on the high school scene a year ago.

In 2022, Geoffreys won 20 matches for the second time — including another sectional singles title — and added a regional championship and a trip to the state finals this time around and has earned her second straight THB Sports Girls Tennis Athlete of the Year award.

She dominated this area, and it took the very best the state has to offer just to slow her down.

After posting a 20-2 record this season, she finished her career at 41-3 overall with her three defeats coming at the hands of the state’s No. 1 player — Emma Gu of West Lafayette Harrison twice — and the 2021 state runner-up Lauren Long from Park Tudor at this year’s state finals.

Playing since she was 2 years old, Geoffreys comes from a far more humble background than the wealth and privilege normally associated with the sport. She and her family — her father, Taylor, has had multiple health issues, and her mother is not involved in Jamison’s life -- have faced more than their fair share of adversity, but through it all, she has thrived by blending her speed, athleticism, raw power and finesse into a difficult player to deal with.

According to Tennisrecruiting.net, Geoffreys moved up to the No. 8 ranking in the state and is ranked 191st in the nation among high school girls tennis players.

Long a fixture in the junior tennis tournaments she could attend, Geoffreys has enjoyed the last two years competing for Anderson. She appreciates the fan support she received at the state finals as well as during her two years playing for Anderson.

Often her fan block included area tennis players who admired her game and travelled to see her compete.

She will compete in club tournaments during the summer, including one next week in Illinois. Later this year, Geoffreys will play tennis while studying nursing or physical therapy at St. Thomas University, an NAIA school in Miami. She is also interested in coaching and being an athletic trainer as well and has been taking EMT classes at the career center in Anderson.

“I’m really excited, but I’m nervous, too, with the weather,” she said. “I know that’s going to be harder to play in because that weather is really hot.”

Anderson coach David Ellis believes the best is yet to come for Geoffreys, who also aspires to play professionally in the future. He believes the instruction she will receive in Florida will help grow her game well beyond where it is now.

“She’s not done playing. That’s for sure,” Ellis said. “She’s going to come back after a year in Florida, and we won’t even recognize her game.”