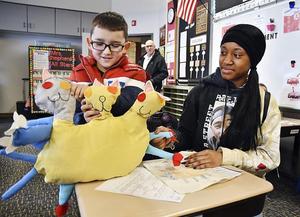 Back in February, two classes at Valley Grove Elementary drew pictures of monsters in their art class. After they were completed, the drawings were handed over to students in the fiber arts class at Anderson High School to be turned into plush toys.

On Monday, the Valley Grove students finally got to see their creations come to life.

In Stacia Partezana’s fiber arts class at AHS, students learn various sewing techniques and have a number of projects to complete, including making pillows and a patchwork quilt.

Before taking Partezana’s class, senior Aidan Broshar did not know how to sew but has tackled various projects since, including sewing a beanie for his brother.

Libby Hahn, senior, knew a few sewing basics before taking the class but has since learned more techniques.

“I think they’re ready to tackle clothing,” Partezana said of all her fiber arts students.

Broshar said that he does have plans to start making his own clothes in the near future.

For the plush project, the high school students used the elementary student’s pictures of monsters to guide them in sewing a doll from scratch.

Both Broshar and Hahn said that this project was difficult for them, especially because the plushies were meant to look exactly like the kids’ drawings.

“I was so scared the kid would cry once (they) got it, ‘This isn’t what I wanted,’” Broshar said.

But when handed their new plushies, most of the elementary students’ faces lit up with joy.

Braylon Lindsey, a second grader at Valley Grove, was surprised that his doll was identical to his drawing.

“They actually did get the three heads,” he said of his cat; he was worried it wouldn’t have enough heads.

He decided to name each head — Waffles 1, Waffles 2 and Waffles 3.

Some students drew their imaginary friends and got to see them come to life.

May’s tablemates, Bella Illiff and Riley Johnson, were also excited to see their creations come to life, noting that they were going to sleep with theirs every night.

Partezana noted that this project would not have been possible without the fabric donations from Michele Mullins, counselor at AHS.

“I wouldn’t have had all of that fabric,” Partezana said, noting that the donation relieved a financial burden as well.

This was the first time her fiber arts class has done a project like this, but she is hopeful that the class can do it again in the future.

This article appeared in The Herald Bulletin on April 19, 2022.