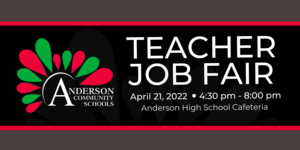 This job fair serves as the final round of staffing efforts for the district. According to Harrison, all current ACS teachers have received a position offer, if they choose to accept it

ANDERSON — Prior to the pandemic, Anderson Community Schools and the Anderson Federation of Teachers began working to find creative ways to recruit new talent for the district.

AFT President Randy Harrison explained that for the past five years or so, there has been a teacher shortage.

“We have to figure out a way to try to get ahead of the game in staffing and having a shot to recruit the best and the brightest,” he said.

In conjunction with Lennon Brown, assistant superintendent of human resources at ACS, AFT came up with the idea of hosting a job fair where both internal and external candidates can interview for job openings within the district.

Representatives from all ACS school with open positions will be at the job fair, ready to interview candidates.

“The job fair provides individuals interested in teaching at Anderson Community Schools the opportunity to interview for open positions and meet with several schools in one evening,” Brown said in an email to the Herald Bulletin.

Having this job fair eliminates the need for multiple interview slots spread out across various days.

Harrison explained that if a school has eight job openings, it can be difficult for all members of administration to be available at the same times as all of the candidates.

This job fair serves as the final round of staffing efforts for the district. According to Harrison, all current ACS teachers have received a position offer, if they choose to accept it.

“Any current educator in the district would have a (position) prior to competing with external candidates at the job fair,” he said.

Current ACS teachers can also attend the upcoming job fair to see what other positions would be open to them, however they would not receive preference over external candidates, according to Harrison.

Both internal and external candidates must sign up for interview slots at https://www.eventbrite.com/e/anderson-community-schools-job-fair-tickets-318870760027. This will allow for schools to have an idea of how many candidates are applying for each position.

This article appeared in The Herald Bulletin on April 17, 2022.