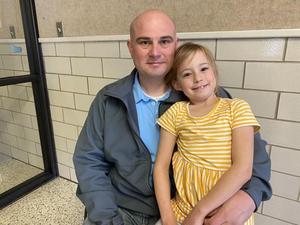 As COVID-19 restrictions began to ease at the beginning of this school year, Bronson Curtis, dean at Edgewood Elementary School, wanted to get the community involved in education again.

ANDERSON — Before the pandemic, it wasn’t uncommon for parents to visit their kids during lunch time. However, due to mask mandates and social distancing guidelines, this type of activity has not been permitted in schools.

As COVID-19 restrictions began to ease at the beginning of this school year, Bronson Curtis, dean at Edgewood Elementary School, wanted to get the community involved in education again.

So in the fall semester, Curtis started the first All Pro Dad chapter in Madison County at Edgewood.

“It helps dads, or any male father figure in a child’s life, to build a stronger relationship, and it does that by getting the dads to have meaningful conversations about life skills, expectations, goal setting (and) things like that,” Curtis said, noting that the programing is geared mostly towards elementary students.

He initially wanted to start this program when he began at the school in early 2020, but the pandemic hit, and COVID restrictions put a halt to that.

Curtis hosted the first All Pro Dad meeting in October.

Joe Heath and his daughter Izzy, a first grader at Edgewood, were the only two attending that meeting.

Heath was interested in the meeting because it provided him an opportunity to increase his presence in Izzy’s life. He explained that he also has a 2-year-old, so it is sometimes difficult to have just Dad and Izzy time.

Curtis then contracted COVID and was unable to host the group in November and December. He grew worried that no one would attend in January.

“We had 40 dads that next meeting,” Curtis said, noting that there are about 47 dads now.

“That’s my favorite part of the meetings.”

Heath also feels that this is one of the best things about the meetings, as it is motivating to see so many dads who are proud of their kids.

“There are guys, or dads, that come in that you can tell they’ve been up all night working. You can tell that some of them are taking off work,” he noted, explaining that sometimes he also has to take off work for the meetings.

He said it’s refreshing to see dads take a break from their jobs, or any other obligations, to be part of this program.

Heath said the program has improved his relationship with Izzy.

Izzy has enjoyed being able to spend time with her dad before school — as well as the doughnuts that Curtis provides at each meeting.

Edgewood is part of Anderson Community Schools, which hopes to start more chapters at elementaries this fall, Curtis said.

The last meeting of the year will be at 7:45 a.m. April 27 in the Edgewood cafeteria. The program is only open to dads of children at Edgewood or male father figures to children who attend Edgewood.

This article appeared in The Herald Bulletin on April 8, 2022.