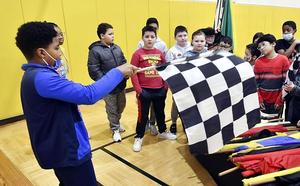 For the first time since the pandemic started in 2020, the 500 Festival & Indianapolis 500 Education Program headed to two local schools earlier this week to teach students about the Indianapolis Motor Speedway’s history.

ANDERSON — Fourth graders at Tenth Street Elementary were joined by those from Edgewood Elementary in the morning for a mobile trip visit, which are in March. This program goes to schools, with 500 Festival staff and community volunteers leading six education stations.

Monday afternoon, students at Erskine Elementary, joined by those from Valley Grove Elementary, had the opportunity to experience these six stations.

At the first station, students learned about the speedway’s traditions, such as the winner drinking a glass of milk after the race, and the history behind the traditions.

Students learned about different careers within the IndyCar realm at one stop.

In another area, students learned about the numbers involved with the speedway. Students participated in an activity that let them see how much money it costs to have a race team.

Another important piece of IMS is the flags. Students were able to learn about the different flags used during races, how to wave them and what they mean.

Lastly, students headed outside and saw an IndyCar in person, though it was a two-seater meant for giving rides. There, students learned about aerodynamics and other scientific IndyCar facts.

Felix Ramirez, a fourth grader at Edgewood, said his favorite part was learning more about cars, which interest him. He was curious about when the next IndyCar race will be so he can ask his parents to take him.

The education program is dedicated to immersing fourth-graders from across the state into the Indianapolis 500, the 500 Festival and their effect on Indiana history. History is one of the Indiana fourth grade school standards.

“We tie the Indianapolis 500 history and traditions to meet that standard for them,” Adams said.

Applications for the program open in the fall. Schools that apply will get classroom materials that teachers can use with their fourth graders for a few weeks during the spring semester.

The materials relate to the activities that students can participate in during the mobile trip visits.

Still, due to the high number of applicants, the 500 Festival selects participants through a lottery.

“We satisfy as many of those requests as we can,” Adams said. They also try to partner schools, like they did Monday with the four Anderson elementary schools.

Anderson Community Schools applied for all six of its elementaries to participate, but due to the lottery system, only four were chosen.

An option for schools is to apply for a study trip, which lets students travel to the Indianapolis Motor Speedway in April for their educational experience. Both options use the same application, which will be available in the fall.

To learn how your school can participate in one of these educational learning experiences or to apply, visit the 500 Festival website at www.500festival.com, hover over the youth tab and click on education program.

The 2022 registration is on the site but is closed. In the fall, the “Register for the 2023 Program” hotlink will go live.

This article appeared in The Herald Bulletin on March 10, 2022.