Award: Up to $1,000 one-time award
This scholarship is awarded each spring to a student aspiring to study music in college. It was established by Zachary’s family and friends in recognition of the young conductor’s musical talent and outstanding character. Zachary graduated from Highland High School in 1999 where he excelled in music.  He went on to earn a Bachelor's degree in music education from Anderson University in 2004. He received his master's degree from Indiana University posthumously after tragically dying in an airplane crash with fellow IU musicians returning to Bloomington from a performance. His parents are Dan and Misty (Ward) Novak, Madison Heights alumni of 1974 and 1973, respectively.
An application is available upon request at aef@acsc.net or simply scroll down to fill out below. 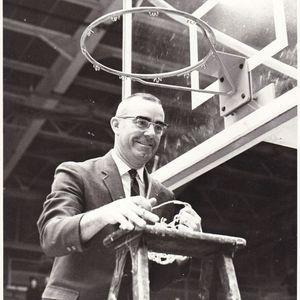 Phil Buck Memorial Music Scholarship Award: Up to $1,000 one-time award
Coach Buck was inducted into the Indiana basketball hall of fame in 1983 after 37 years of coaching. During 24 seasons at Madison Heights, Buck won nine sectionals, four regionals and a semi-state title. In all, he won 495 games and 13 sectional titles.  Buck coached one Indiana Mr. Basketball (Ray Tolbert- 77′) and several Indiana All-Stars. This scholarship will be awarded
annually to a deserving AHS basketball player.
DONATIONS
(please include your return address for a tax deductible receipt)

Contributions may be mailed to:
Anderson Education Foundation
1600 Hillcrest Avenue
Anderson, IN 46011

Your contribution of any amount may be designated: